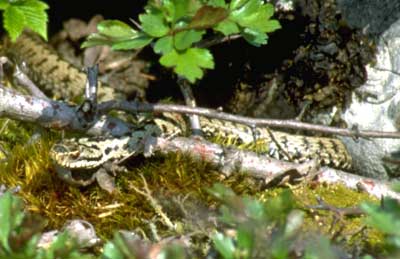 The understanding of the genetic structure between and within populations is a major concern for the conservation biology. Indeed, inbreeding or inbreeding drift in small populations can only be compensated by migrations between different demes. By using molecular markers such as microsatellites, the migration can be evaluated and signs of genetic diversity decrease detected. Moreover, inbreeding or genetic diversity are often related fitness parameters (such as survival, neonate survival or fecundity), but only a limited number of study have compared those parameters in the field. 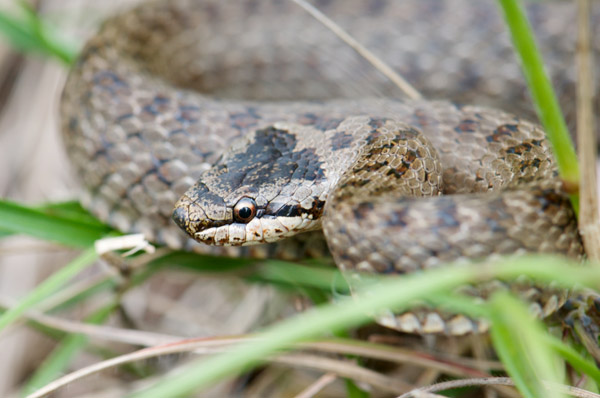 The investigation within Vipera berus populations did not reveal strong genetic diversity reduction in the populations of the Jura Mountains, execpt for one which has suffered a strong bottleneck about 100 years ago due to culling (at that time, the destruction of vipers was actively supported by local authorites...). The genetic diversity seems to be sufficient in each population to avoid population crash due to lack of diversity, as observed in Smygehuk (see Thomas Madsen's works). However, high genetic differentiation was detected between all the populations, even between populations separated by only 1-2 km. Thus, the gene flow seems to be very limited between adder populations.

On the opposite, the gene flow is important for other European Colubrids, such as the grass snake (Natrix natrix) or the smooth snake (Coronella austriaca). Indeed, these species did not show genetic differentiation between populations spearated by about 10 km (or more) and the reduction of the gene flow seems to be proportional to the distance between populations (at least within N. natrix populations along the Aar river).

First attempts with reptiles have been conducted for the slow worm in the "La Côte" (between Lausanne and Geneva, Switzerland) region.

Fitness of animals is directly related to their survival and their reproductive success. By the lack of parental care and the absence of social bonds between mating couples, snakes are ideal model for studdying parameters that are involved in the reproductive success. For example, in the adder, a direct relationship between the length of the male and his reproductive success was observed. Moreover, multiple paternity frequently occurs in this species and the reason of such behaviour by the female must still be studied.