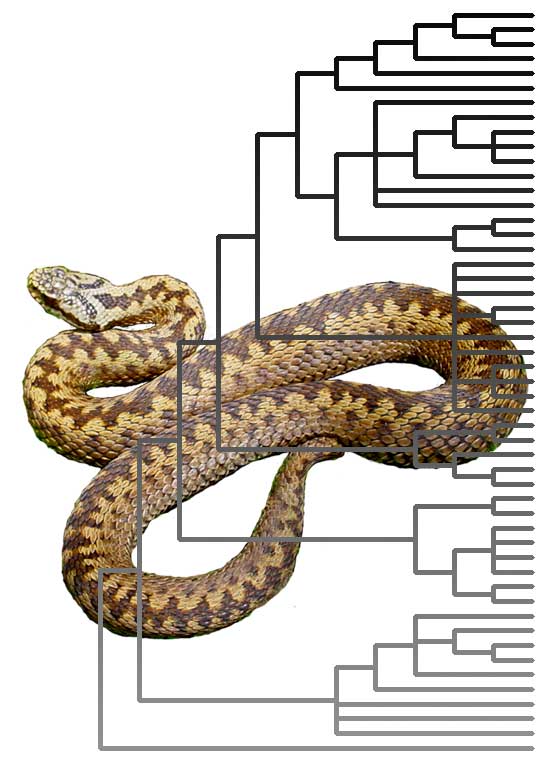 During my PhD, I have studied the phylogeography of three European vipers, the asp viper (Vipera aspis), the common adder (V. berus) and the nose-horned viper (V.ammodytes). The results showed a stronger genetic diversity than previously supposed, especially in V. ammodytes. The occurrence of numerous refugia used by this species during the last glaciations in Balkans peninsula is considerable and confirmed the necessity of more phylogeographical studies in this region. The adder showed an unsuspected clade in Italy and a huge genetic variability in the northern clade due to the use of several small refugia located North of the Alps during the last glaciation. The asp viper displayed a more common pattern (Spain and Italian refugia), but the occurrence of a small southern France refugia was demonstrated. Indeed, most of the reptiles are ideal taxon to understand complex recolonisation patterns due to the low colonisation rate, their ability to survive in small refugia and the hibernation capacity.

In collaboration with Anne-Laure Ferchaud and numerous persons in the Europe, we are presently working on the phylogegraphy of the Vipera ursinii complex (regrouping all taxa of the sub-genus Acridophaga). The results will be submitted soon.

Based on the genetic results, morphological analyses are curently conducted in order to evaluate if morphological differentiations can be observed between genetic clades isolated since 1 million years (or more) or if selection on morphology conducted taxa to maintain a similar morphology.

In Vipera berus, some morphological differences were found between the Italian and the Northern clades. Owever, additional analyses should be conduted. For Vipera aspis, a collaboration implying Philippe Golay(Elapsoidea, Geneva) and Jean-Claude Monney (karch, Neuchâtel) allow to discover that some morphological caracters are mainly influenced by the environemental parameters such as temperature or humidity. The high genetic differenciation observed in the sand viper (Vipera ammodytes) in the Central Balkan region seems not to be correlated to morphological differences detected by the different publication of Ljiljana Tomovic (University of Belgrade, Serbia) and collaborators. Consequently, we initiated a collobaration with Lijliana and Silke Schweiger (Naturhistorische Museum, Vienna) to continue the phylogography work, detect the contact zone between some genetic clades and improve the morphological knowledge of this species.